This has been on my "to fold" list for some time; well, I finally quit procrastinating and tackled it.  12" x 12" square of wyndstone paper.  Not a bad turn out for my first attempt.  At least I'm okay with it.

I look forward to playing around with different faces and hats (yes, I plan on folding and practicing some more on this model).  Hmmm....he looks a bit lonely without any musical instrument...


A bit of my process: 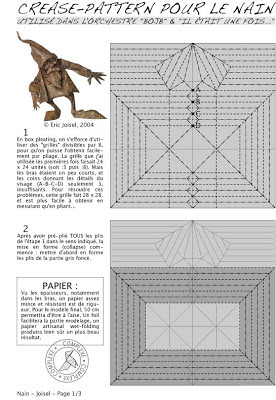 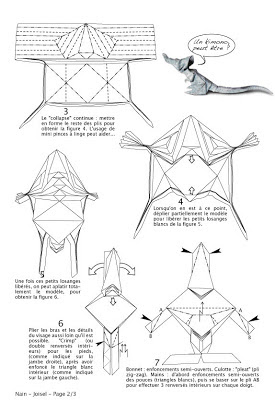 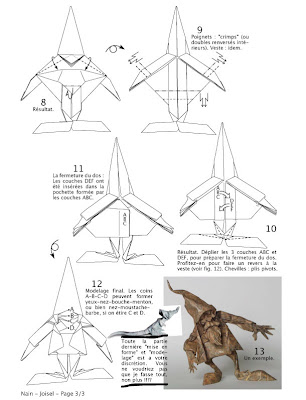 A couple of comments at the Origami Forum by Adam and Ysou offers a translation of the French text (Also appears and translated into English in Tanteidan Convention book 13):

1) In Box pleating, people often try to use grids that can be divided by 8, because it’s easy to create them. The grid I used before was 24x24 ( first: 3, then:8 ). However, the arms were a bit short and the corners that created the facial details ( A-B-C-D ) – only three of them – were not sufficient. In order to solve these problems, this model uses a 28x28 grid. It is easier to create this grid by measuring than by folding…

2) After having folded EVERY crease as indicated in step 1, the collapsing process begins: Fold along the creases in the gray-shaded part.

3) The collapsing process continues: Collapse along the rest of the creases in order to get to the shape as shown in step 4. Using clamps might make things easier…

4) When you are this far, partially unfold the model in order to free the small rhombus ( **diamond shaped part ** ) as shown in step 5.

5) Once these diamond shaped parts have been freed, one can fully flatten the model, in order to get the result as shown in step 6.

6) Fold the arms and the facial details as far away as possible. Crimp ( or inside reverse fold ) to fold the feet ( as shown on the right leg ), after having folded the white triangle inside ( as indicated on the left leg ).

9) Wrists: Use crimp folds ( or double inside reverse folds ). The garment: Do the same.

10) Here’s the result. Unfold the flaps at ABC and DEF, so that you can close the back. Feet: Swivel fold.

11) Closing the back: The flaps DEF have been put into the pocket formed by flaps ABC.  Take advantage to do a lapel. (correct ?)
Ankle: Swivel fold.

12) The finished model. The corners A-B-C-D can be used to form the eyes, nose, mouth and beard. Alternatively, you could make a nose, mustache, and beard if you pull at corners C and D.